What is Next Generation Antivirus?

NGAV opts for the proactive protection measures over the signature-based threat detection. That makes such solutions much more competitive against modern threats. 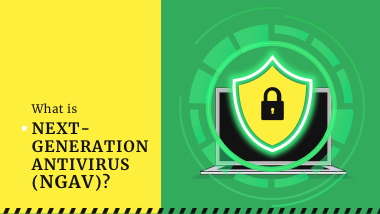 The Internet is the biggest source of malware of all time. It gave a humongous punch to malicious software spreading when it appeared and is still one of the most frequent reasons for getting infected. That’s why cybersecurity researchers pay so much attention to internet security.

Everything in our universe goes through evolution - the process that helps to keep up with the latest needs. Antiviruses are not the exception - although they are done by humans, who are also evolved. NGAV is an evolutionary development from the classic antivirus program based on proactive protection principles.

Next-generation antivirus, or NGAV, is a general conception of a security application that popped out as a substitution for classic antivirus. Contrary to the latter, NGAV is generally backed by malware detection through proactive methods, in particular, heuristics and neural engines. Next-generation solutions also feature a wider control area, which makes it possible to minimize the number of attack surfaces. It is especially relevant when we talk about next-generation tools for corporate protection.

The overall detection in NGAV is switched to background scanning with behavioral detection mechanisms and, if possible and needed, artificial intelligence. Such a change was required since the modern threat landscape is too dynamic to rely only on signatures. In legacy antivirus tools, heuristics were more about complementary detection, and neural networks or any other forms of AI implementation were pretty rare. Meanwhile, cybercriminals discovered simple and effective ways to circumvent database-backed detection. That was the critical reason for legacy AVs to become less effective.

The NGAV term in cybersecurity means not a sole software solution, but a whole class of security software created for different scales of a protected environment. It can be present as a regular personal protection tool, as well as an EDR/XDR solution or their variants - as they also fall under the classification of NGAV. It's worth mentioning that the software for corporate security we noted above was the first one that fully represents the conception of next-generation protection. User-oriented applications remained in the legacy AV state for a long time, and even these days, not all programs of this class have any improvements towards the new generation.

As was mentioned, the key features of NGAV consist of the modernized detection mechanism that puts a much bigger emphasis on threat detection based on a program's behavior and minor elements. Thanks to technological development, these days the systems used in next-generation tools are honed enough to show max efficiency. Still, things like machine learning require a harsh control of the learning vector - to avoid the wrong sampling and thus fall into false detections.

The other significant change of NGAV compared to legacy AVs is that the protection is provided continuously rather than through on-demand scanning. Usually, when the user or system administrator starts suspecting something is wrong - it is too late to react. And the scans are often launched exactly after spectating the blinking windows or random files appearing on the desktop - some clear signs of an unwanted activity inside the system. Next-generation antivirus tools are aimed at constant check-ups of all processes running in the system - the chosen behavioral detection is best for this purpose. Moreover, it is much more resource efficient compared to legacy solutions.

Aside from the advanced scanning mechanism and the altered method of security control, next-generation antivirus software also features an increased view of the protected environment. Regular antivirus check-ups rarely touch networking connections if ones are away from web browsers or certain applications. Most often, attack surfaces, like RDP, vulnerability exploitation, and malicious scripts are often missed by legacy AVs - and are included in an increased control area in NGAV solutions. The latter can also apply a zero-trust principle that almost completely nails the mentioned threats if set up properly.

In short, NGAV offers superior protection over what legacy AV offers, in both user-oriented software and solutions for corporate security . Here are the critical profits that next-generation antivirus tools bring to the protected environment:

What is the difference between NGAV and EDR?

, the Endpoint Detection and Response solutions, shortly EDR, are the early representations of the application of the NGAV conception in real life . It was a historic first type of software that featured protection mainly backed with proactive methods and extended control over the environment (in particular, the endpoint and all related devices). EDR also offers a brand-new view on event logging, that is a must-have when it comes to providing a consistent protection to corporations. Each security event matters, and the events during the cybersecurity incident are critical. Having their description available for the analysis gives the security team the ability to bring the changes to an existing system based on how the attackers were trying to get in.

Next Generation Antivirus vs Legacy Antivirus

NGAV seems to be a completely new view on how antivirus programs should work. But for most users, classic antiviruses that generally opt for database-backed security and control only over the vital systems still look like they’re more than enough. It is not very clear why NGAV is needed - but let’s check the things top to bottom.

Legacy antivirus programs, or the thing we used to call simply antivirus programs, appeared long ago. They generally bear upon signature-based detection, which supposes that malware is already known to the analysts who maintain the database. Detection rules that were called to cover the whole groups of malware were slightly more progressive but still not flexible enough to deal with complex malware that can easily circumvent these indicators. Still, in the times when legacy AVs were dominating the market, such malware was almost absent. 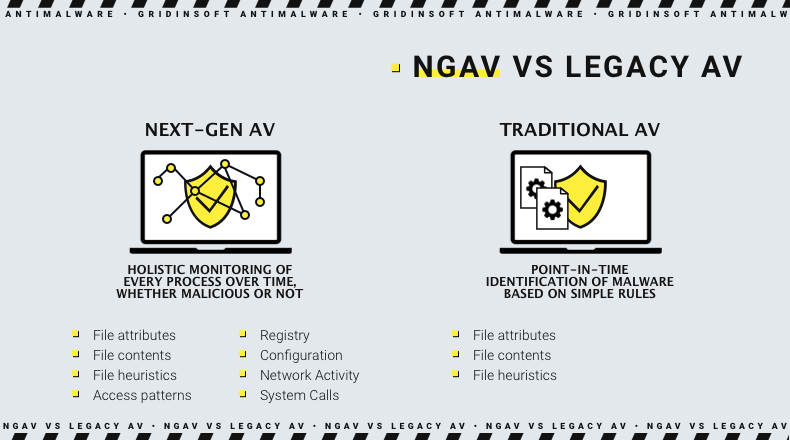 However, times changed, and nowadays, it is pretty easy to find a deeply repacked sample of malware, which blinds the signature-based detection and avoids the detection by most the detection rules. Moreover, obfuscation and solely the rapid malware evolution are enough to leave the legacy of AVs’ methods far beyond. Signatures and all related technologies are rather reactive than proactive malware detection methods - which became a definitive factor for the development of NGAV.

In real life, NGAV solutions have become dominant in the corporate security solutions market since ~2015. The profits they give for large network protection fulfill the needs of most companies, especially compared to segmented protection from legacy antiviruses. However, for single users, there is still a competitive choice between classic and next-gen antimalware programs. NGAVs have an increased efficiency against user-targeted attacks, but this difference is not as critical as in the case of corporations. Moreover, hybrid programs on the market offer functionality from the NGAV conception with signature-based detection technology.

Should my company use a next-generation antivirus?

Cyberattacks became a real pandemic over the last three years, with the total loss from the attacks increasing yearly. By 2025 analysts predict the overall loss from cyberattacks will reach $15 trillion, while in 2020, this number was around $1 trillion. Such a huge amount of money goes to the hackers’ wallets, not because of a fatal set of circumstances. Most of the hacks happen because of the company’s reckless behavior in the questions of protecting their assets from unauthorized access.

Having a proper security tool is essential for preventing cyberattacks. Most of the manual approaches for establishing a secure environment repeat the issue of legacy antiviruses - these steps are generally reactive. Your system administrator may be a high-skilled professional who knows all possible security breaches and counteraction ways - which is great. But it will never be capable of preventing zero-day vulnerability exploitation or foreseeing a brand new way of penetration and cannot be ready to react 24/7. Programs do not need to sleep and can sometimes see what humans cannot even define - thanks to machine learning.

NGAV, exactly, one of its corporate forms — EDR or XDR — is a must-have if your company is mid to large size. The network grows exponentially with your business expansion, so it is almost impossible to keep cybersecurity intact when you have only manual controls. XDR will be better for large companies, as their networks are often obscenely large. EDR concentrates its attention on endpoint security and can also check the network computers that connect to this endpoint. Hence, the latter will be optimal for medium business – extended solutions may be too much for them.

Small companies that may sometimes even function without the network and sole users can be effectively protected with tools that feature much less coverage. However, to be sure that your tool can stop the most modern threats, it is better to choose the one with the mentioned features. Some legacy AVs these days feature the functionality that repeats the NGAV conception and makes it possible for the tool to correspond to modern needs. You can have a look at GridinSoft Anti-Malware, which is an example of such an evolution.

What is a NGAV provider?
NGAV is usually provided in a form of software-as-a-service (SaaS). It supposes that the developer of the solution keeps in touch with the clients and continuously supports them during the usage of their software. Moreover, some of the SaaS vendors also adjust their products for the needs of the customer. So the NGAV provider is a SaaS vendor who gives you the next-gen antimalware solution and supports it through the whole period of usage.
What to look for in an NGAV solution?

As any other product, NGAV can have different quality and set of features. The latter is more about a personal choice, but there are several things that should be present in a properly-made next generation antivirus solution.

The ability of local scanning. This function’s usefulness is often undervalued, but in fact it can be a great way to scan the network after the initial breach, giving no chances for crooks to hide their activities. Local scanning supposes the ability to scan the environment without the Internet connection - for example, when it was forcibly disconnected after the indication of compromise. It is also a good marker of a solution that brings all modules required to provide an efficient scanning.

Threat intelligence capabilities. The data about each attack is extremely valuable - it gives full information about the attackers’ approaches, tools they use and targets they go for. NGAV solutions that can perform an automated threat intelligence can give the analysts team a ready report regarding some of the attack details, easing the overall procedure.