What is SIEM? Security Information and Event Management.

SIEM offers a wide range of tools to collect, sort and analyze information about what is happening in the corporate network or another application area. 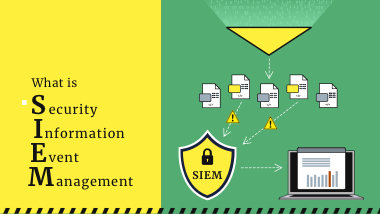 Having the full view on the battlefield is essential for any officer who controls the troops. Cyberwarfare, particularly cybersecurity in corporations, requires the same level of awareness about what is happening and what has already happened. SIEM systems provide such ability for cybersecurity specialists.

Security Information and Event Management (shortly SIEM) is a bunch of tools and techniques for researching the events in the environment where this system is applied. SIEM consists of two technologies that were growing separately from each other - Security Event Management (SEM) and Security Information Management (SIM). The former is responsible for monitoring and alarming the incoming events in the network (new connections, possible issues, and dubious behavior). SIM, on the other hand, is about analyzing logs and providing the corresponding conclusions to the analysts' team. 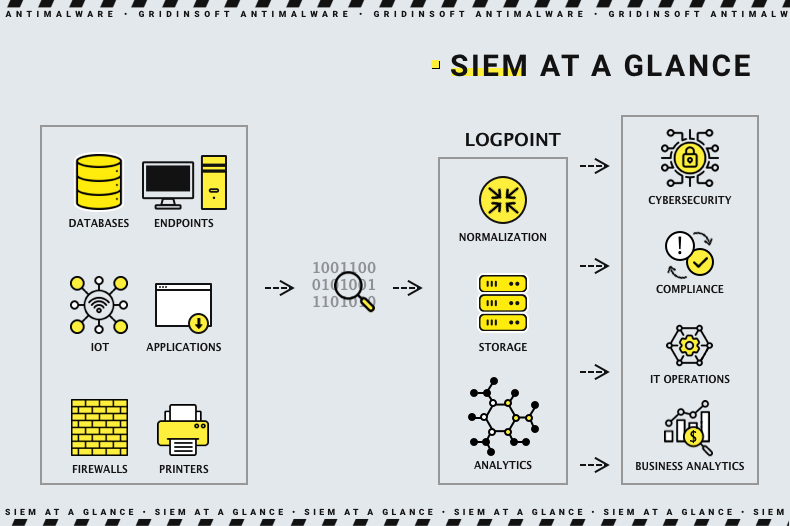 SIEM conjoins both of these approaches, offering a simultaneous logging of all events in the system and their analysis. This technique allows the cybersecurity teams to monitor the happening, detect the threatening elements and react to them. The reaction usually requires skills and software that make it possible to secure certain areas of the network. For a more effective and convenient response, companies opt for EDR/XDR solutions that allow them to apply the needed actions automatically for all of the units.

What are the SIEM components?

The SIEM process consists of 4 logical steps. The software that provides them is unitary, but these procedures are easily divisible. These are data collection, data consolidation, event notifications and policies of actions. All of them are running on a repeated and continual basis. Let’s check out each one, top to bottom.

How does a SIEM work?

As you can see by the paragraphs above, the key function of SIEM is to gather and group the information about the things that happen in the environment. It is also able to provide advice on how to deal with potentially dangerous events, but these tips are more like a supplement than a recommendation. The cybersecurity team must make the decisions, and the exact SIEM can make only minor adjustments.

The standard algorithm of the SIEM work consists of the four steps above but with deviations according to the current situation. When nothing happens, the system is idling and passively monitoring the events. However, when something unusual happens - for example, a new user is connected to the network, or a workstation is rebooted at an unusual moment - SIEM starts working. It pays attention to the suspects, analyses the information, and, if something valuable is spotted, reports it to the cybersecurity team.

Security information and events management is not an autonomous cybersecurity process. It cannot protect your network when you’re away, as its general function is to journal and process the information. Most often, cybersecurity in corporations is provided by EDR/XDR solutions, and SIEM is a complementary system that eases the tracking of events.

By the form of implementation, SIEM can be divided into 3 categories - cloud, in-house and managed. Most of the other differences that may be used for classification are too minor and differ from one vendor to another.

Cloud SIEM, as you can suppose by its name, is a security information and event management system that bears on cloud computing. This variant became popular after the global spreading of cloud computing solutions in corporations. It gives the SIEM functionality with much less effort spent on the deployment. However, it is slightly less adjustable for the needs of each separate corporation. Another problem is the increased attack surface: the data collected and processed by the SIEM system may be leaked not only from the client company but also from the cloud service provider as well as intercepted on the way to the server. However, the flexibility of tariffs and no need to purchase and maintain the hardware makes it pretty attractive, especially for medium businesses.

In-home SIEM supposes implementation of the system on your own hardware and software. That provides maximum integration since, usually, the in-home model supposes the extended adaptation of the software for the needs of a certain company. Usually, such integration is opted for by the companies which use an all-encompassing protection measures that form a full-size security centre. Such an approach requires way more skilled specialists to take part and costs much more money but will be as effective as possible. The security center will provide the peak performance of all security solutions applied in the environment, and in particular, the security event and information management process.

Managed SIEM is a type of system that may be based on both in-home and cloud forms but with the help of an outsourced analyst team. The technology provider offers both the calculation power and the qualified staff who will make decisions, constantly or on-demand. This service is attractive for companies that lack the corresponding staff or do not want to hire additional personnel.

Why do we need the SIEM tool?

SIEM is a great complement to the anti-malware protection that is already present in the corporate network. Although it can present the whole pack of information needed to monitor the network and understand the threats, it does not give any facilities for automated malware detection and removal. Moreover, without the XDR, SOAR, and UEBA, it is pretty hard to create any response at all - manual management of the security settings of a whole network is complicated even for a professional.

Using SIEM in cooperation with other security mechanisms will drastically increase the overall protection, as it raises awareness among cybersecurity personnel. Contrary to UBA, it will be effective even in small companies, as it does not concentrate on only users’ behavior . If you want your cybersecurity team to be aware of any little thing that goes beyond routine events - SIEM is what you need.

Which three problems does SIEM solve?

There are three major problems in any cybersecurity system that lacks the SIEM - absence of proper content, time to react and information overload. Security information and event management system is offering the solution for all of them.

Absence of proper content is when the cybersecurity team finds it difficult to act because there is no relevant and easy-to-process information available. SIEM finds what is needed and makes it much easier to process. Information overload is a contrast point for the previous situation. When there is too much data floating around and there is no grouping for it, anyone will struggle to make a decision. Sorting and grouping functionality of SIEM allows to heavily mitigate this issue. Time to react is the problem that comes from the previous two. While having a massive information flow, or no flow at all, you will likely fail to react in a proper time frame. For cyberattacks, the momentum may last for just a few minutes. Solving the problems with structuring the data and giving the proper alarms sharply decreases the reaction time and increases the chances to deflect the attack.
Which devices does SIEM monitor?
Main sources of information for SIEM are network devices, workstations, endpoints and domain controllers. During the setup, the SIEM engineers can specify additional surfaces to monitor. There is no problem to make the software collect the information from all possible devices, but that may decrease the efficiency of the solution.
What does a SIEM engineer do?
A SIEM engineer is a person that helps the company to set up and maintain the security information and event management system. It is also responsible for stable functioning of the solution, and supports the company on technical aspects of SIEM workflow.
What was the first SIEM?
First security information and event management system appearance happened in 2005, when the cybersecurity vendor Gartner offered a conjunction of SIM and SEM conceptions. The final product received the name that combined the names of its predecessors - SIEM. At that point of time, all of the solutions were pretty limited on the collected information processing and generating the notifications.