What is Firewall? Firewall Meaning

Firewall is a hardware- and software-based network monitoring system that controls the incoming and outcoming connections. It has many purposes, but the main one is network security. 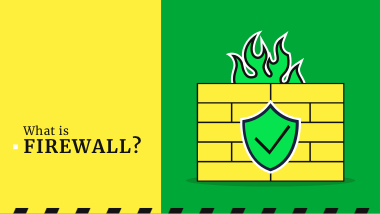 Firewall is like a magic barrier that makes it possible to go through only for chosen ones. However, the list of chosen ones is determined not by magic - a system administrator or ISP manages it. Still, for some people, it may be a witch trick.

A firewall is a complex tool designed to protect internal networks from external sources (internet, for example) threats like malware or threat actors. It may consist of a hardware device (network router or switch) or software (firmware or a specific app in the OS). Exactly, devices cannot function properly without the specific programs or firmware.

Firewall monitors incoming and outgoing network traffic deciding on whether to permit or block going data packets according to a previously established set of security rules. It serves as a barrier between the user's internal network and incoming traffic from outside.

How Does Firewall Work?

Firewall is a borderline between external networks and guarded internal ones. It usually has inline insertion across network connection monitoring all coming in and out data packets. To separate malicious data packets from original packets, the firewall has a specifically created set of rules to distinguish between the packets monitored. A firewall is needed not only to protect against malware. They are also used when you need to cover certain parts of the network infrastructure from prying eyes or restrict internal users from connecting to certain sites. Set rules can be based on several important security points that indicate the desirability or safety of any specific data packet that is subject to monitoring:

The term "packet" here means pieces of data specifically formatted to the internet transfer. Each packet will contain the data it is transferring and the information about it, for example, where this data packet is coming from.

What Are The Different Types Of Firewall

Firewall can come in the form of software and hardware. Specialists recommend having both variants in place. You can install a firewall as an application on your computer and it will regulate the traffic via applications and ports. Alternatively, you can use a physical firewall that looks like a piece of equipment you need to install between the gateway of your network and the network itself. Below are the most common types of firewalls and what exactly they will do in terms of securing your networks:

Do I Need Firewall Protection?

When you connect your computer to the Internet it automatically becomes susceptible to various cyber attacks. Firewalls are the tools that will help you to protect yourself against all the malicious activity going on the Internet and at the same time ensure your positive experience on it, allowing data you need safely come to you.

Firewalls put a barrier between your computer and malicious traffic, but they also prevent unauthorized access to your computer or network. You can configure your firewall so that it will block data coming from specific locations, ports, applications, etc, and at the same time ensure the safe and secure passage of relevant data.

Can Firewall Fully Protect Your Computer?

Even if your firewall is properly configured, it may leave some security gaps in your network. Most users won't be a great concern if they also use antivirus or antimalware software and maintain good cyber security hygiene. In case of everything is in place , there won't be many problems for ordinary users.

The same goes for large companies and enterprises but on a large scale where there could be up to thousands of various entry points like servers, endpoints, clients, and more. Firewall accompanied with effective anti-malware or antivirus software, staff education on main cyber threats and how to recognize them should ensure the most robust cyber security system.