What Are Packet Sniffers and How Do They Work?

A sniffer (also known as packet sniffer or packet analyzer) is a program (or equipment) able to monitor, log, and analyze traffic flowing within a network or its part. 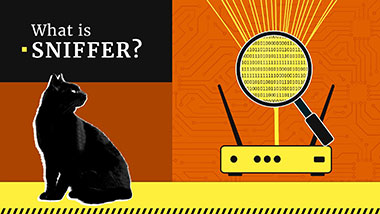 What Is a Packet Sniffer?

Sniffers are like a hidden camera that sits in the dark corner and gets everything that happens in the room. Then, the one who sets this surveillance receives this data - and figures out what to do next.

Sniffers are the application software, firmware, or hardware module that aims to gather the data sent from- and to the system of the entire network. They do not intrude into the data transfer, just copy the Internet packages they can reach. Not necessarily a malicious tool, sniffers can be of service to network administrators, Internet service providers, and security specialists. However, they are also a potential instrument of data and information thieves. Hardware sniffers can be (and sometimes are) embedded in routers, modems, and other types of nodes. Software sniffers can be installed on servers, intermediate devices, and endpoint computers.

To explain what a packet analyzer (another name for a sniffer) does, besides likening it to a road checkpoint, where all passing vehicles are inspected, we’ll have to explain how endpoints receive data in normal conditions without a sniffer involved.

Usually, a client receives and views only data intended for its IP address. However, within one network, much more data flows “past” each client. Therefore, unlike a usual spying program that only captures traffic related to the particular endpoint, a sniffer can log traffic from the whole network (or an available part of it,) thus being a much more encompassing tool.

How Does Packet Sniffer Work

Local wired shared-medium networks can roughly be divided into two groups, and the analyzers’ work specificity varies according to the networks' structure. Thus hub networks (where all traffic flows between all endpoints) are perfect for passive hard-to-detect sniffing, while switch networks that filter data (due to its massive amounts) require extra actions from the sniffer side. An analyzer needs to add more data to the traffic to monitor the whole data stream. Thus, it is much easier to detect such an active sniffer.

Monitoring overall network traffic requires the specific settings (promiscuous mode) of the network adapter of the sniffer-bearing device. Sniffers also vary in their ability to gather traffic and decode and analyze data. There are lots of settings in sniffers too. The analyzer operator can filter the packets to be analyzed by different criteria.

What Sniffers Are For?

Although modern data protection measures include such solutions as SSL-protected websites and Virtual Private Networks (VPN), sniffers do not become useless. Even encrypted data packets can provide analysts with enough information for certain administrative and security needs. For example, logging and analyzing traffic by network administrators can help detect and cut short untypical network activity. Just like that, watching street traffic can give you a notion about some road accident causing a traffic jam. Such a conclusion doesn’t require knowing who exactly drives the cars and who the passengers are. Depending on their functionality, packet sniffers can perform various actions:

Unfortunately, spying and gathering users’ data and sensitive information with the subsequent attempt to sell or use it to harm is also possible sniffer employment. Sniffer usage can be both legal or illegal. In any jurisdiction, there is usually a way for security services, network administrators, and ISPs to use it legally. Also, a judge might issue a warrant for the police to use packet analyzers if there is a need to do it.

Can Sniffer Read My Data?

Yes and no. Theoretically, a sniffer can grant its users access to your data. But nowadays, since most websites and instant messengers use end-to-end encryption, the data contained in transferred packages remains inaccessible to the external eye. However, the data protection issue remains. First of all, not all websites have the needed level of encryption. To check whether a particular website has the required protection, look for HTTPS at the beginning of its address line. This abbreviation stands for Hyper Text Transfer Protocol Secure. If you notice that the website you are accessing employs an HTTP protocol – beware. You will not necessarily be spied upon there, but there will be a technical opportunity for that. You can learn more about the protection of client-to-server connections in our article on SSL certificates.

Also, note that website HTTPS protection only protects your data on that particular website. Your activity in-between protected websites (like the browsing history) can be monitored by sniffers. Moreover, sniffers have tools to decode certain types of encrypted packets. Therefore, the threat is still there.

How Can You Prevent Sniffing?

Protect yourself against spyware with Gridinsoft Antimalware, the best Anti-Spyware available. Regain control of your privacy with a spyware scanner, detector, and remover that's ultra-fast and refreshingly lightweight — and 100% effective.

⇢ Hackers use Discord as a tool for stealing passwords

Is packet sniffer a spyware?
Although Sniffer can be used as spyware, it is not the one by design. "Packet sniffer" is a utility that intercepts network packets without modifying them. A firewall also sees all of a computer's packet traffic. However, it can block and discard any packets that its program dictates. Packet analyzers simply observe, display, and log this traffic.
Why do hackers use packet sniffers?
Packet sniffers, better known as sniffers, are almost like a dog sniffing out information that passes through a network. They allow hackers to sniff data packets from both public and private networks. The primary purpose of sniffing attacks is to steal data and personal information.
Can sniffer capture passwords?
Well, the answer is definitely yes! Sniffer can capture passwords and any information passing through the network - usernames, email addresses, personal information, pictures, videos, whatever. So while we can intercept network traffic, Sniffer can intercept passwords that pass through. But the question is, what passwords? More specifically, what network protocol passwords can we intercept? This is because some network protocols do not use encryption. Such protocols are called open text (or plain text) protocols. And because open text protocols do not encrypt communication, all data is visible to the naked eye, including passwords.
Why is a packet sniffer important?
With a packet sniffer, sometimes called a packet analyzer, network administrators can monitor their network traffic and gain valuable information about their infrastructure and its performance. This is why administrators constantly monitor their network for planned maintenance and optimization. This allows them to analyze the traffic flow on their network and determine which applications are using the maximum bandwidth.
Does VPN prevent packet sniffing?
Data encryption is probably the best solution against eavesdropping. A virtual private network (VPN) tunnel connection allows you to protect yourself from packet sniffers. The data passes via a securely encrypted tunnel when you use a VPN. Your information is broken down into pieces or "bits" and sent through the tunneling process. This includes information used by websites, applications, and other services. As a result, the packet sniffer will only see encrypted data, which is useless and of no use to the attacker.