What is a VPN, and What Does It Do?

VPN (a virtual private network) - is the name of various services that allow you to encrypt incoming and outgoing user traffic for protection, hide user data, and alter some of this data for the benefit.

You may be interested in taking a look at our other antivirus tools:
Trojan Killer, Trojan Scanner for Android.

GRIDINSOFT TEAM
VPN (Virtual Private Network) - is the name of various services that allow you to encrypt incoming and outgoing user traffic for protection, hide user data, and alter some of this data for the benefit. VPNs have both hardware and software components. Users need the software part and connection to the server, where the hardware works. In addition, the real-time data encryption makes it impossible to read. So what is a VPN connection?

One of the reasons people use VPNs is because they don't trust their ISP. There may well be a suspicion that the provider collects data about its customers and then leaks it for money to third parties. It often happens, especially since even the data that the provider can receive is in great demand. Even the history of visiting sites is enough to target ads by IP addresses. Another option is government censorship, or the ability to access some resources only from certain countries or regions. Briefly explain what VPN on the computer allows you to bypass both restrictions.

How Does VPN Work?

After we figured out a VPN on the computer, let's see how it works. When connecting to a VPN, your browser exchanges public keys with the VPN server and establishes a secure connection with strong encryption. After that, all traffic between the browser and the server is hidden even from your ISP. Then the VPN server, in turn, establishes an encrypted connection with all the sites you intend to visit. Moreover, VPN can present you as a resident of any arbitrary country, assign an IP address, etc. 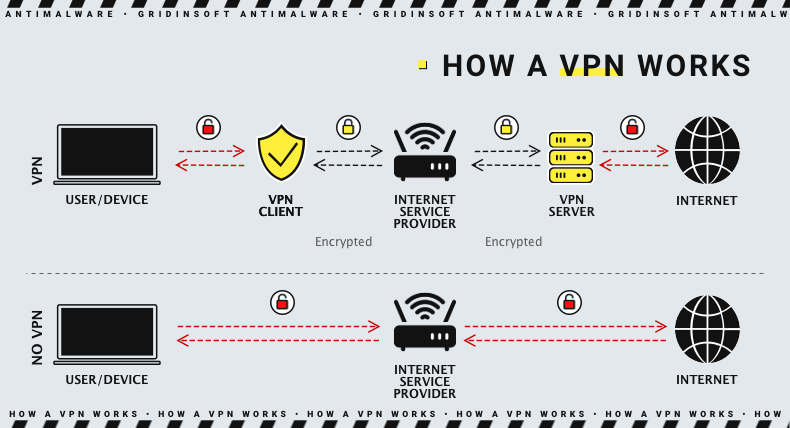 To have a more detailed understanding of what VPN does to your connection, let’s check out several definitions related to networking. Those are private, public and local IP addresses. They may look similar, but represent two different parts of networking.

Private IP is the IP-address given to the Internet router that is used to connect multiple other devices to the Internet. That router may be both a network switch or a Wi-Fi router - it will equally have its private IP-address. That address is like the internal IP address, that is active and reachable for your home network. When the router sends the queries to the Internet, it uses public IP.

Public IP addresses are given to your device (or, what is more often, to your network router). It acts as the identifier of your computer/smartphone to the broad Internet. To decrease the space address use more rationally, NAT was implemented. This technology allowed giving a single public IP address per network instead of giving it to each device. The router remembers the sequence of devices and sites they were connected to, and delivers the requests back depending on the local IP of connected devices.

Local IP is the IP given to your device inside of the network. Same to the private IP, it cannot be reached from the outside of the network - until you send the packets specifically to the device. Local IP addresses may have both IPv4 and IPv6 form.

The only thing VPN alters is your public IP address. It acts as the intermediary between your router and the website you try to connect to. Therefore, the site thinks that you’ve connected it from another place. And you actually do that - especially if you choose the connection through the VPN server in the other country. That can help you with circumventing the network restrictions in your country, or ones on certain websites (i.e. the connections ban from the IPs of a certain country). Additionally, the fact of connecting to a VPN server is the only thing that your provider can record about you. A server to which you will eventually connect will get bogus information about you thanks to the VPN intermediary.

Difference between HTTPS and VPN

Someone may ask: what is the difference between the encryption provided by VPN and HTTPS (Hypertext Transfer Protocol Secure), where SSL certificates are used to exchange secret keys between the browser and the website. The Internet service provider will not be able to read user traffic, will it? Then why use VPN? What is a VPN configuration?

Although the mechanism for creating an encryption tunnel in VPN might be HTTPS is the same, the area of ​​​​its application in the case of HTTPS is limited to the browser-website channel. Under HTTPS only, you won't hide your attempts to access websites from the IPS. The provider will know which sites you have accessed and be able to track any of your activity except the encrypted. Moreover, VPN is not only used to secure your outgoing traffic from the provider. With VPN, you can hide and change data about you from the websites you are active on, which is even more important than protection against a hypothetical threat in the face of IPS. 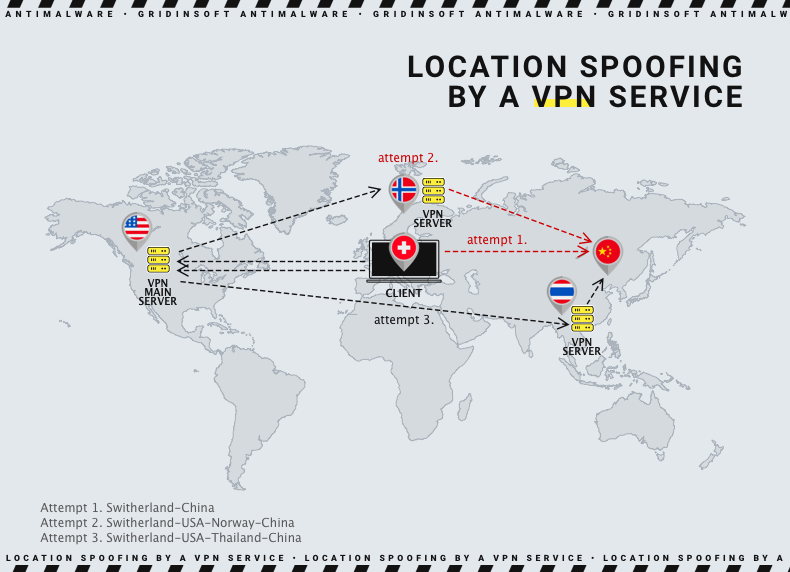 How can VPN help you to circumvent firewalls?

Firewalls are the specific setups or applications that control the Internet access. They may be installed on different levels - local network, ISP or the server. The first may limit the list of sites you can connect to from the inside of this network, and restrict the external connections. ISP-level firewall controls the list of the websites you can access at - such restrictions are generally established according to the legislative changes. Server-level firewalls control the list of IP-addresses that can connect to the server - that is done to minimise the unwanted traffic.

So how VPN may help you to break through the firewall? You cannot do a lot to the firewall on the local network level. VPN supposes the connection through the remote server one level above the Internet server provider. However, the firewall in the local network will not give you a chance even to create a request to the forbidden site. Nonetheless, VPN is very effective against the bans from the provider and the websites you are trying to connect to. When the VPN connection is established, all your ISP sees is the connection to the VPN server. After this connection the provider is unable to forbid the connection to the site, since all the requests are handled by the VPN provider.

The mechanism that allows circumventing IP bans is much easier. Site administrators ban the certain IP, or the range of IP addresses - usually ones that belong to the certain country. Such a situation happened to russian sites, which blocked the connection from Ukraine - after a chain of DDoS attacks in March 2022. VPN connection allows you to change your IP address for the sites you connect - including ones that block your real IP.

IPv4 and IPv6 - what is the difference?

The current Internet addresses are currently running two standards simultaneously. Since both of these standards are about marking the virtual address of your machine in the network, having a hybrid IPv4/IPv6 address is like having two “house numbers”. That paradoxical situation is very atypical for the Internet, where things must be standardised as much as possible. So how did that happen?

IPv4 is the first address format that appeared in 1981. You could have seen those addresses as four numbers, divided by a dot symbol - 203.31.08.99, for example. It is supposed to be the maximum number of 232 (4,294,967,296) devices in the network. Even at the moment of its implementation to ARPANET in 1982, it was pretty clear that this number would be exceeded pretty soon. Even with some tricks that allowed to decrease the speed of address space usage (NAT for instance), it was hard to stop the growth of the global Internet. Thus, in 1998, IPv6 was proposed as the solution for that problem. 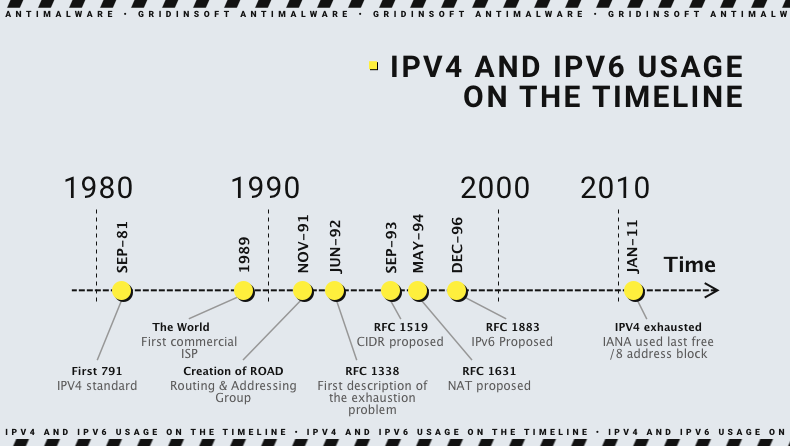 The timeline that shows the IPv4 and IPv6 relations

IPv6 has a much bigger address space, and the corresponding improvements in the protocol due to the increased address space. The latter buffed from 2^32 to 2^128 - around 3.4×1038 devices. Despite its development being complete by 1998, it was not used instantly. Thanks to the actions aimed at decreasing the exhaustion of the IPv4 address space, the need for the new space was delayed until mid-’00s. That also gave a needed time gap to improve the software base and add the IPv6 protocol support to all actual OS versions.

If you have made up your mind to use VPN, look for a service that will feature the whole set of crucial VPN functions:

Here are the main types of VPN technologies. They have much in common but differ in handiness, capacities, and usability.

SSL VPN is most often a corporate VPN solution that allows all users to access company files and databases via personal devices. What is needed for this model to work is HTML-5 compatible browsers on connecting devices and a VPN encryption applied to the router or a single machine, through which all connections pass.

A site-to-site VPN is not as flexible as SSL VPN, but it is a good solution for large corporations with many LANs (local area networks) connected within a WAN (vast area network.) Site-to-site VPN will provide secure data transfer throughout the environment.

This one is the most common and popular type of VPN among individuals. The service-providing server is remote, and the user only has to install the software part. As the user connects to the server, the secure connection is established and maintained until the end of the session, keeping all the traffic unreadable to potential interceptors. The software working on the users' device allows choosing which region to spoof and other options. The users of desktop computers and mobile devices can benefit from VPN via the right software for their operating systems.

You can install a VPN client for yourself as a client, a separate program that you will launch before starting browsing. But this is not the only option. All modern browsers support these add-ons, and VPN service providers have downloadable extensions.

VPN clients for mobile devices are no different from desktop ones, except for their mobile interface.

Also, the wireless routers can be configured to connect to a VPN server first before accessing any other resource. Thus, you can protect the traffic of all devices connected to the network through this router.

As already mentioned here, there are custom solutions for large companies configured specifically for particular workgroups. The main task of such VPNs is to prevent information leakage and eliminate the threat to corporate data from employees connecting to internal networks using their devices.