Zip Bomb - What is it? How does it work?

A Zip Bomb or "Decompression Bomb" is a malicious archive file that contains a lot of repeated data that can crash the program reading it. 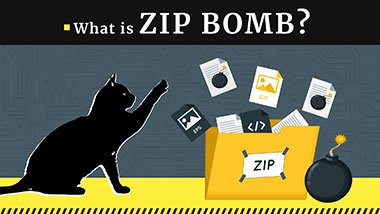 What is Zip Bomb?

A zip bomb (decompression bomb, death archive) is a kind of virus that, at its low weight, contains a massive amount of compressed information, that is often enough to overwhelm the PC memory amount. The extensive decompression leads to PC freeze and further system failure.

The classic zip bomb is a tiny archive, most of which is measured in kilobytes. When this file is unpacked, its contents are more significant than the system can handle. Typically, these are hundreds of gigabytes of data, and the more advanced may reach petabytes (millions of GB) or even exabytes (billions of gigabytes). So, yes, to be clear, we’re talking about filling the excubites in the kilobytes.

The first mention of a zip bomb is dated 1996. One of the users of the then-popular messaging service Fidonet posted on the bulletin board a malicious archive, which an unsuspecting administrator opened.

When you open a file, it starts unpacking all the data, which causes the program or the entire system to crash, as there is simply not enough space to unpack this amount of data.

The most common zip bomb you can find on the Internet - is "42.zip". It weighs only 42 Kb in a packed form.

This is achieved by a recursively nested zip files system, where the lowest zip-file level is decompressed to size 4.3 GB. The construction uses the most common decompression algorithm, which is compatible with most zip parsers.

Zip Bomb Definition: How it works?

The principle of the zip bomb is that it creates, for example, a text file that is either empty or contains the same symbols and is archived. Because the file contains the same information, it will archive itself and have a much smaller size than the others. Then another 16 of the same archives are created, but since they are completely identical in the hash, they will be like one single file and weigh nothing. Then another 16 copies, then another 16 copies, and so 6 times. Eventually, we have 6 layers of 16 archives, each of which has 16 same archives.

Compression is the reduction of the number of bits required to represent data. Let’s look at this in more detail:

Now we use an intermediate (compressed) string form along with some instructions on how to get the original string:

What is Zip Bomb Used For?

Since the zip bomb does not directly damage the system, it is often used to cause a failure or disablement of the program trying to access it. It can also be used to disable antivirus software to create a backdoor for other typical malware.

Instead of stealing the regular operation of the program, the zip-bomb allows the program to work as intended. Still, the archive is carefully designed, so unpacking it (for example, antivirus scanning for viruses) takes an excessive amount of time, disk space, or memory (or all of it). At this time, the attacker may try to infect the system with a real virus. Although sometimes in an attempt to scan attachments, the antivirus takes all the resources of the PC, thereby loading the system so much that further use of the device becomes impossible.

Where Does the Zip Bomb Come From?

It’s almost impossible to catch such a virus these days accidentally. Most modern anti-viruses have learned to recognize and neutralize zip bombs, and in practice, the effectiveness of such an attack is minimal.

Can Zip files have viruses?
Zip files are not dangerous, but it is essential to be careful when opening files that you get from unknown sources or the internet. Some zip files contain zip bombs, malware, or other sly things. To be sure that the thing you’re going to launch is OK, scan the file with anti-malware software.
Are zip bombs harmless?
Zip bomb makes the system non-functional, as it takes as much CPU power as possible. Even if the unzipping process is completed, you will likely suffer from the lack of disk space. But to make this happen, various antivirus programs can detect the danger and alert the user about the zip files that supposingly contain bombs.
How big is the biggest zip bomb?
There is one of the well-known zip bombs called 42.zip. This zip file consists of 42 kilobytes of compressed data and five layers of attached zip files in sets of 16. Each lower-level archive contains a 4.3-gigabyte file that contains 4.5 petabytes of uncompressed data. 1 petabyte is 1000 terabyte - much more storage space than an average computer system has. Flooding it with 4500 terabytes of data means immobilyzing it.