What is DNS Tunneling attack? 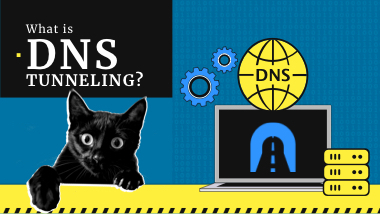 What Is DNS Tunneling

GRIDINSOFT TEAM
Asking a stranger about the route to the place you need always relies on trust. On the Internet, there is a special service to show your browser the right way. However, there is a possibility that this service will be spoofed, or even substituted on a rogue one.

The DNS is essentially the vast phone book of the Internet. And DNS is also the underlying protocol that allows administrators to query the DNS server database. DNS Tunneling attack turns the domain name system into a weapon for cybercriminals. Because DNS is a highly trusted and widely used system on the Internet, this attack takes advantage of this protocol. It allows malicious traffic to penetrate the organization's protection (the victim). Cybercriminals use malicious domain names and DNS servers to bypass protections and completely steal data. However, before we get to the attack, let's uncover the DNS mechanism in more detail.

DNS (Domain Name System) is a global database of website addresses. Its job is to translate human-friendly domain names such as example.com into their corresponding machine-friendly IP addresses such as 123.45.67.89. This way, we don't have to memorize long and complicated numbers to get to the right site. Instead, we quickly remember domain names and can use them to access our favorite news, sports, or elsewhere.

Many services rely on the large number of DNS conversion requests that appear all the time. For this reason, DNS traffic is widely used and trusted. Since DNS was not invented to transmit data packets but only to resolve names, it was not originally seen as a threat to malicious communications and data theft. However, the DNS is more than just a domain name translation tool. DNS queries can also transfer small portions of data between two devices, systems, and servers, making DNS a potential vector for attacks.

Unfortunately, most organizations often don't analyze DNS packets for malicious activity. Instead, they focus on analyzing web or email traffic where they think the chance of an attack is higher. However, it is best when each endpoint should be closely monitored to prevent DNS tunneling attacks.

It's important to know

Since a DNS tunneling attack is difficult to detect, it is a widespread cyber threat. It is used to route DNS requests to an attacker-controlled server and provides them with a hidden channel of control and management and a path to steal data.

Typically, DNS tunneling includes useful data that is added to the target DNS server. In addition, that data can be used to gain control over the remote server and applications. Moreover, for this attack, the compromised system must be connected to an external network to gain access to the internal DNS server. Cybercriminals control the server, which acts as an authoritative server, and the domain name to complete server-side tunneling and executable data payload programs.

How does DNS Tunneling Work?

A DNS tunneling attack takes advantage of the DNS protocol and tunnels malware or data through the client-server model. It starts when a user downloads malware or an attacker manages to exploit a vulnerability in a compromised device to transmit a malicious payload. In most cases, the cybercriminal wants to keep a connection to the compromised machine. This will allow him to run commands on the target device or exfiltrate data. In addition, the attacker can establish a control and monitoring (C2) connection. Such traffic must be able to pass through various network perimeter security measures and avoid detection until it crosses the target network.

For this reason, DNS is an appropriate option for tunnel configuration. This common cybersecurity term refers to a protocol connection that transmits payloads and data (commands) and passes through perimeter security measures. Thus, a DNS tunneling attack manages to hide information in DNS queries and deliver it to a server controlled by a cybercriminal. Hackers can use base32 or base64 character sets, or even encrypt the data. Such encryption will pass unnoticed by simple threat detection utilities, which search the open text. To set up a DNS tunnel, the attacker registers a domain name and sets up an authoritative name server under his control.

Next, the malware or payload on the compromised device initiates a DNS query for the subdomain that defines the encrypted link. The recursive DNS server (DNS resolver) receives the DNS query and forwards it to the attacker's server. The server responds with malicious DNS data (commands) back to the compromised device. Thus, the attack goes through without triggering any security measures.

A DNS tunneling attack can be divided into several stages:

There are several methods for detecting DNS tunneling attacks. They can be divided into two main categories - payload analysis and traffic analysis.

Payload analysis - DNS payloads for one or more queries and responses are checked for signs of tunneling.

How to protect against DNS tunneling attacks

DNS is a critical service; blocking it can be a severe problem. Protecting against a DNS Tunneling attack includes several actions that can help you prevent such an attack.

Despite the non-obvious use of DNS, DNS tunneling is a severe cyber threat. It can lead to large-scale negative consequences. This is because a cybercriminal can use the tunnel to leak information. In addition, the lack of a direct link between the hacker and the target makes it difficult to try to detect the attacker.