What is Code Injection?

Code injection is the action that supposes slipping the malicious code to a legit but vulnerable application. Later, occur triggers for malware installation. 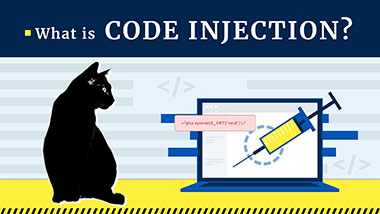 What is Code Injection?

Contrary to humans, programs cannot distinguish whether they run routine work or are manipulated. As a result, hackers may force them to download and run malware, disable the security elements of the system, and do other things that don't belong to the app's original purpose. But, of course, such a trick is possible only when the program has the corresponding vulnerabilities.

Code injection (a.k.a. remote code execution) is an attack based on the input of improper data into a program. If hackers manage to exploit program vulnerabilities, they may succeed in injecting malicious code through the input line or uploaded file with the subsequent execution of this code. Those files usually exist as a DLL or a script, placed somewhere on your disk. Hackers may download them after the initial compromise and use them only when it comes. 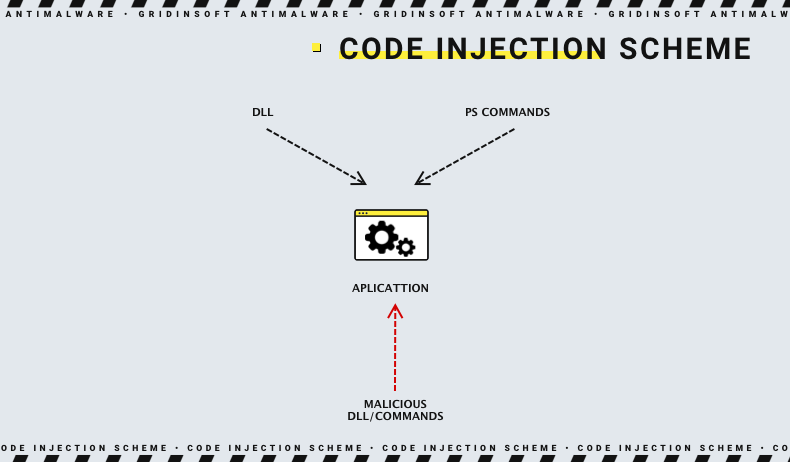 The actions performed by the malicious code may go beyond the hackers’ user clearance, and their effects are limited by the capacities of the programming language in which the program is written. As a result, the program’s execution can be distorted, data removed, altered, sent somewhere (stolen), or accessed without clearance. Access for other service users can be denied, and even host takeover is possible. Another probable consequence of code injection is a computer virus or internet worm introduction and subsequent spreading.

Speaking of code injection in cybersecurity, we mean a certain type of attack - a special case of a wider group of cyber offenses, the malicious code attacks. The latter, when spoken of, usually implies the so-called command injection attacks rather than code injection. The attacks of both types exploit the vulnerabilities of software environments.

Command injection uses the program wherein it is introduced to execute commands within a wider environment. For example, a malicious website script or a script-fitted excel file can initiate the execution of Windows Shell commands, therefore working beyond the application from which they originate. The field of action for a code injection attack is limited by the program where it is executed. For example, there are programs to work where users input search requests and commands, such as databases. Introducing specially crafted data can break this program and perform legally unavailable actions. For example, hackers can use the request line of an SQL database to tamper with data in it. That would be code injection.

How Code Injection is Possible?

Code injection exploits the vulnerabilities of an interpreter – a program that executes instructions directly without compiling them into machine code. The environments most susceptible to code injection are SQL, LDAP, XPath, NoSQL. Code injection attack is, of course, possible in operating system scripting, SMTP headers, program arguments, XML parsers, etc.

Data format, characters used in queries, the amount of data being input, etc., are the tools of code injection attacks. Sometimes, code injection works like a hacker-launched pun. An equivocate wordplay, that can confuse the interpreter software, either leading to the execution of the desired malicious instruction at once or bringing the program into the state vulnerable to another injection.

Non-Malicious Use of Code Injection

Code injection is not necessarily a harmful tool for program overriding. Experienced users can knowingly use it to detour some procedures or perform actions unintended by the program. In databases, for example, it is possible to use code injection to create a column for search query results that the program previously didn’t display. It allows the implementation of search results filters based on the criteria of these newly introduced parameters.

The simplest example is an unintended tagging of a person in a group chat of an instant messenger application via using @ before the name of the chat member. Single and double quotes are also candidates for an accidental code injection trigger since software developers can use one of these pairs for special purposes.

Malicious Code Injection and Its Effects

The effects of injection of malicious code, written intentionally to harm, vary. They are mostly unauthorized access, privilege escalation, and obtaining information via hacking. The attacks can be performed on the client’s side (if the application validates the input data on the client's side, for example, in the browser) or on the server side (if the validation takes place on the server).

Types of attacks with the use of code injection

Protection against code injection includes safety measures for developers and precautions for users who can fall victim to such attacks. We will touch on the latter within this post.

Disable scripts (completely or selectively). Users can change the settings of their browsers or install extensions like NoScript for Firefox to block JavaScript on websites completely, but this measure seems overkill. Yes, it will eliminate the threat of cross-site scripting, but it will also cut down half of the modern web functionality. Choose what is more important for you.

Stay away from questionable websites. Substantial malicious code attacks happen from untrustworthy web resources. Watch out for the absence of SSL certificates on websites recognizable by HTTP in an address bar (instead of HTTPS). Along with counterfeits from dubious links you found somewhere, beware of DNS hijacking practices. Those tricks may lead you right to the server controlled by crooks.

Keep the software updated. Most code injection cases happen because of software vulnerabilities. Undiligent check-up of the used DLLs, the ability to slip the arbitrary code or command for execution through the PowerShell - those breaches could be met even in the most popular programs. Software vendors check their software regularly - and release security patches that can save your time and money.

Install an anti-malware solution to keep your system protected from malware that can be installed via code injection. Not each anti-malware program will fit - the one with on-run protection is needed. However, the ideal solution for preventing code injection is using the EDR system. It will be a monolith shield for the whole network, rather than scattered security apps on each computer. Such a program will effectively counteract the threats above or malware injection attempts.

Protect yourself against malware with Gridinsoft Antimalware, the best Anti-Malware available. Regain control of your privacy with a malware scanner, detector, and remover that's ultra-fast and refreshingly lightweight — and 100% effective.

What is code injection used for?
Code injection is a term that describes attacks that inject code into an application. This injected code is then interpreted by the application, changing the way the program runs. Code injection attacks usually exploit an application vulnerability that allows invalid data to be processed. This attack takes advantage of poor handling of unreliable data. These attacks are generally made possible by a lack of proper input/output validation. Attackers can inject (or embed) code into a computer program with this type of vulnerability.
How do hackers inject code?
Hackers first check the application for attack surfaces that can take untrusted data and use it to execute program code. These include direct input such as file uploads, form fields, or other data sources such as cookies and query string parameters. Code injection usually consists of a natural character string concatenation, the PHP function eval(), or it's equivalent in another language. A successful exploit gives attackers access to the application's server interpreter.
What are the types of SQL injection?
Types of SQL injection can be classified based on the methods they use to access server data and their potential damage. They can be In-band SQLi, Error-based SQLi, Merge-based SQLi, Logical (blind) SQLi, or Out-of-band SQLi.
Which areas are vulnerable to code injection?
The most vulnerable environments for code injection are SQL, LDAP, XPath, and NoSQL. But code injection attacks are also possible in operating system scripts, SMTP headers, program arguments, XML parsers, etc. In addition, code injection can also target applications written in Python, HTML injection, PHP, and JavaScript.
How can injection attacks be prevented?
The most effective way to avoid SQL Injection attacks is input validation and parameterized queries, including prepared statements. The application code should not use input directly. The developer should sanitize all input, not just web form input like login forms. They should remove elements of potentially malicious code, such as single quotes. It is also recommended to disable database error visibility on working sites. Database errors can be used with SQL Injection to get information about your database.