Reverse engineering is the process of software or hardware item disassembling, in order to understand how that works or which specific elements it has. 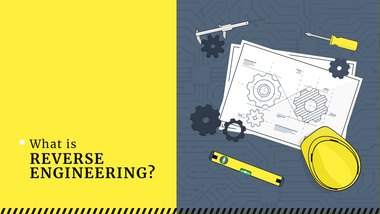 What Is Reverse Engineering?

GRIDINSOFT TEAM
We probably all broke many toys as kids trying to figure out "how it works”. Of course, as we get older, that goes away. But not always. The first thing the military does is pick up weapons on the battlefield - to see how this AR-15 assault rifle works and whether it can be made into an M416. So do the users who want to know how the program works - but with a different approach.

Reverse engineering is restoring an object's structure, whether it is a program or a part. This is done when the source code of a program is lost or inaccessible. Software reverse-engineering - restoring the principles/algorithms of a program to understand how the program works, and possibly re-create this mechanism. There could be the following purposes:

However, software hacking should not be confused with reverse engineering: hacking can be defined as actions such as bringing back debugger functions or those modules which were disabled by default due to vulnerabilities or other problems, as well as taking apart how the license check works, and disabling it. Reversing, in turn, is a complete analysis of the program brick by brick and analyzing its behavior.

How does Reverse Engineering Work?

Globally, reverse engineering reversal can be divided into software and hardware. However, we are not interested in the latter since this article only touches on software reverse engineering. For example, take a program written in a language, C++ or Java, that other programmers can understand. But to run it on a computer, it must be translated by another program, called a compiler, into a binary code. Compiled code is incomprehensible to most programmers, but there are ways to convert machine code into a more human-friendly format, including a decompiler software tool. Reverse engineering consists of several steps:

As mentioned above, reverse engineering is often used to investigate viruses and find practical solutions to counteract them. To reverse engineer malicious code, engineers use many tools. Here are some of the most important ones:

As malware becomes more complex, the chances that the disassembler somehow fails or the decompiler creates confusing code increase. Thus, reversers need more time to understand the disassembled or decompiled code. During this time, malware can wreak havoc on the network. Because of this, more attention is paid to dynamic malware analysis. Dynamic malware analysis involves using a closed system (sandbox) to run malware in a safe environment and watch what it does.

However, in addition to the advantages, using a sandbox for dynamic analysis also has its problems. For example, a lot of sophisticated malware use circumvention techniques and can detect that they are in a sandbox. When the sandbox is detected, the malware will not show its true malicious nature. Advanced malware has a set of tools they can use to fool sandboxes and avoid detection: they can suspend their malicious actions, acting only when the user is active, thus hiding the malicious code where it will not be detected, along with a host of other evasion techniques.

By using dynamic analysis to automate malware analysis as much as possible. Cybersecurity professionals can tackle advanced malware more quickly and efficiently, freeing up their time for challenging work, such as learning and parsing new encryption schemes, reverse communication protocols, or working on attribution. The more advanced the automated solution, the more likely the reverser won't have to go back to the process's initial (and time-consuming) phase. The latter involves unpacking, deobfuscating, and understanding the fundamental behavior of the malware.

The best option would be for cybersecurity teams to implement a two-pronged approach in which sandbox technologies are used to analyze the vast majority of threats automatically. In contrast, reverters devote their time to "surgically" analyzing the insides of the most complex ones when additional threat information is needed.

Reverse engineering has many legitimate applications in IT. It can be either a legal or ethical approach to solving compatibility problems, recreating obsolete components, assessing security, improving an existing product, or making it cheaper. The steps involved can be complex and vary depending on what is being reengineered. For example, QA professionals who want to solve user problems with software products may reengineer complaints to find the cause. Determining the root causes of user problems is difficult, but reverse engineering techniques eliminate some guesswork.