What Is Clickjacking and How Does It Work?

Clickjacking is a fraud technology that supposes the interface modifications to force the user to click the link or button you need. Usually, it is done through the interface overlay. 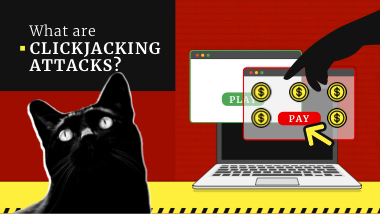 We are used to modern cyberattack vectors, and for some reason, ignore all ones from the past and the possibility for new vectors to appear. Sure, the future is hard to predict, and most past methods are blocked globally at their origins. But only a few people know it is possible to steal your clicks.

Clickjacking or UI redress attack is based on a visual trick to make the user click on an element of the web page that is invisible or disguised as another element. The main goal of a clickjacking attack is to get unsuspecting website visitors to act on another website (the target website). For example, a user might be attracted to a website promising a prize. However, when the user clicks to accept the award, their click is used to purchase an item on the e-commerce website. This is achieved by hiding the user interface of the target website and placing the visual user interface on top of it so that the user does not know he or she is clicking on the target website. 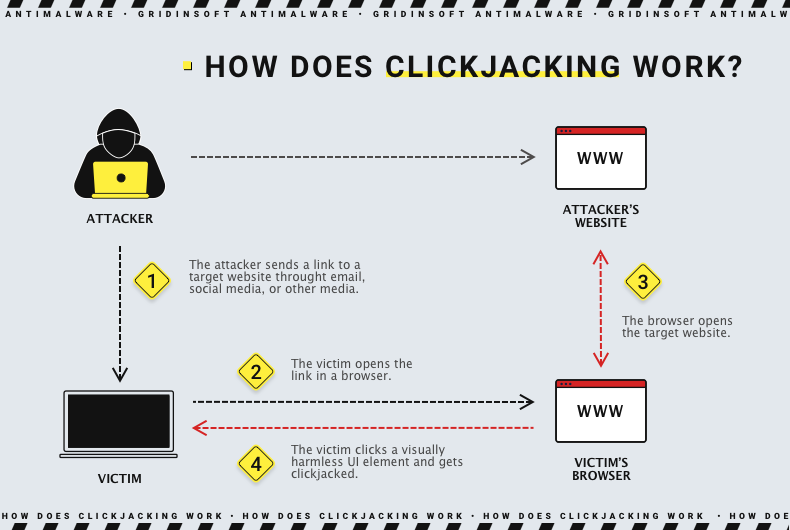 How does clickjacking work?

Because of this placement of the user interface, this type of attack is also known as UI redress or UI fix attack. Therefore, the user can unwittingly perform transactions such as transferring money, buying products, downloading malware, liking social networks, etc. But how does it work? Let's go further.

Depending on the nature of a particular situation, an attack may be called by different names. Here are some of them:

This is part of the many other variants of clickjacking. However, despite the multitude of variants, the basic principle they rely on is the same: capturing user actions by tricking the user interface.

The attacker creates a clone of a website that looks like the real one but embeds the malicious website in an iframe tag. Since the iframe is invisible, the malicious site is not visible either, and the victim only sees the site that looks like the real one. Using social engineering, the attacker makes the target visit a malicious website and follow a malicious link. For example, it could be a link to a fake contest they won or an enticing photo or interesting picture.

Clickjacking attacks are pretty rare nowadays, but it is better to have the risk minimized. Most of the job for your protection against clickjacking is already done by the security technologies development, in particular the security updates to web browsers. But some situations may still force us to make it.

Protect yourself against clickjacking with Gridinsoft Antimalware, the best Anti-Malware available. Regain control of your privacy with a clickjacking scanner, detector, and remover that's ultra-fast and refreshingly lightweight — and 100% effective.

Use browsers that support the Intersection Observer API.

The Intersection Observer API can track the "visibility" of target elements on a web page, allowing the browser to detect when a framed window is hidden. The following desktop browsers currently support the API:

There are enough browsers available on mobile devices that it is almost impossible to list them all. If necessary, they can always be downloaded from the Apple App Store and the Google Play Store. However, the good news is that the default browsers on iOS and Android support the Intersection Observer API.

Use a browser add-on

Several browser add-ons can provide some protection against clickjacking attacks. The most popular options are:

What is the difference between clickjacking and phishing?

In fact, these two fraudulent tactics aim for the same thing, but via different approaches. From some point of view, clickjacking may be called a specific way of phishing. Still, phishing is more a social engineering tactic, which forces the victim to do what the fraudster wants. The victim does everything benevolently - missing the details that can uncover the fraud.

Clickjacking also makes the victim believe it is doing what it really wants to, but instead of social engineering, it spoofs the website interface in a specific way. While clicking on a button on a legit site, the victim in fact clicks a button on an invisible frame that calls the function needed by the fraudster. After that click, the latter receives the victim’s identity information, hijacks the money transfer, grabs the cookies and so on.

How common is clickjacking?
This threat is not so common, as the researchers spotted only 630 sites among over 250,000 ones checked up. In short, it is a miserable amount - only 0.25%. However, the sites that are detected as involved in clickjacking still have about 43 million visitors per month - which is more than enough for fraudsters to top-up their wallets.
Is clickjacking an XSS attack?
XSS attacks have several things in common with clickjacking, but they differ by the endpoint of the attack. XSS usually ends up downloading and installing malware on the victim’s device via throwing it on downloading pages or exploit landings. All this nasty stuff is done via exploiting the JavaScript functions and the vulnerabilities of a certain site. Clickjacking also uses JavaScript, but only to draw an invisible frame over a legit page.
What causes clickjacking?
The main reason why clickjacking is even possible is that sites are not protected from using their site in combination with a frame. Hackers may easily call an unprotected site and put their own UI over yours, entrapping the victim. Fortunately, it is quite easy to avoid your page exploitation - by certain JS plugins that may counteract the overlapping frames. You can also forbid the framing of your website from other domains, giving this right only to the other pages of your site.
What is the impact of clickjacking?
Main targets of clickjacking attacks are stealing your money, grabbing the detailed information about your device and location, installing malware or stealing your cookies. All of these cases are extremely unpleasant, as you can potentially lose your money, reputation or even freedom. Cookies may contain the login data from your accounts, including online banking. Stealing the information about the device and location may be used by various government agencies for spying purposes. One may say, the clickjacking is a hardcore, but very effective sort of phishing.