All the abbreviations mean Wi-Fi security protocols that ensure the safety of users' communication over wireless networks. 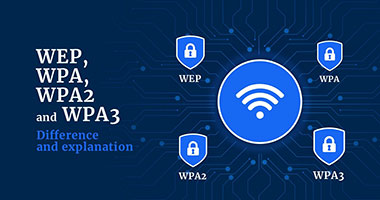 Suppose you come across abbreviations like WEP, WPA, WPA2, and WPA3. You most likely got confused by all the terms. But there's nothing difficult to understand. All the abbreviations mean Wi-Fi security protocols that ensure the safety of users' communication over wireless networks.

It so happens that wireless networks are more vulnerable to cyber security threats than wired ones meaning they need more robust and user efficient security and safety. A particular non-profit organization, the Wi-Fi Alliance, also owns a Wi-Fi trademark to oversee the implementation and regulation of Wi-Fi security protocols.

There are currently four different types of security protocols, some of which are quite obsolete and others still widely used by Wi-Fi routers around the world. They are WEP, WPA, WPA2, and WPA3.

The principle by which all security protocols work is to encrypt the transmitted data so that for some intruder, it won't be recognizable or readable if intercepted. With the help of encryption, key protocols mash up the data to prevent its interception.

But still, the question is what those abbreviations all mean and how they work concerning securing your Wi-Fi router. Each of the abbreviations stands for the following terms:

To know more about each of the terms, read the following paragraphs below.

What Does WEP Mean?

This protocol became the very first of its kind to be created to secure Wi-Fi security. In September 1999, Wi-Fi Alliance put it to work. Initially, the protocol's key was 64-bit because of the US restrictions on exporting cryptographic technologies. Later, the protocol received 168-bit and 256-bit sizes a key.

How does WEP work

The most common implementation of key size, though, remains to be the 168-bit size. But in 2004, the protocol was stopped from being revised because of its evident ineffectiveness against much more increased computing powers. So instead, the WEP protocol was substituted by WPA, which took more from it.

Specialists advise that systems that still use WEP security protocol should be upgraded, or the device needs to be changed if it's not possible.

What Does WPA Mean?

Next, after WEP proved its apparent ineffectiveness with numerous vulnerabilities found, WPA came to replace it. This security protocol had much better authentication and encryption features.

In contrast to WEP, the protocol used two technologies different from Wireless Equivalent Protection. They were advanced encryption standards and temporal key integrity protocols. In addition to them, WPA supported built-in authentication, which WEP didn't.

Currently, the most preferred security protocol for Wi-Fi routers. In 2006, it replaced WPA and became the most widely used.

The protocol uses user-based password protection that eliminates the possibility of unauthorized remote access. You don't need to go straight up to your router and upgrade it to WPA2 because chances are this security protocol is already in place.

But if the situation might be different, check your Wi-Fi router security protocol by signing into your router via browser or, if it has a mobile app, then via the app. In the same way, you can change your Wi-Fi password.

What Does WPA3 Mean?

Cybersecurity specialists think the protocol will dominate others because of its more up-to-date security measures against present cyber threats.

Encrypts traffic on open networks where password is not used;

The same as with WPA2 ENT, this security protocol also needs a management frame protection to be in place. There also exists another stronger 192bit version of this variant;

This variant provides security when the set password is weak.

Besides having different variants for different security measures, the WPA3 security protocol offers some key features that help to improve the security of Wi-Fi router much better even for WPA2: 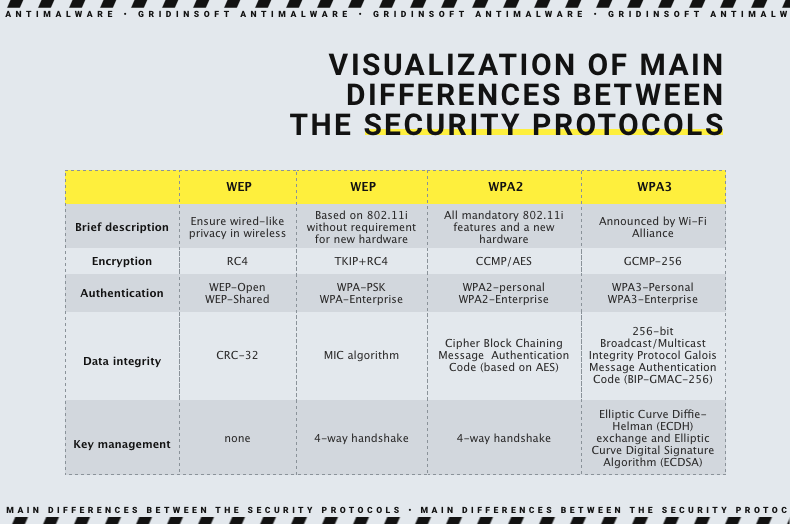 Main differences between the security protocols

How To Protect Wi-Fi Home Network?

In addition to having the appropriate Wi-Fi security protocol, you also need to follow some critical cybersecurity tips concerning your Wi-Fi network security:

💡 Turn off the remote administration feature.

If you don't need this feature regularly, it would be better not to have it turned on. Because it's one of the common ways for threat actors to get your wifi settings and change them without you. See the administration section of your router to change this setting.

This setting will allow you to restrict devices connecting to your home network, giving permission only to those you registered. In such a way, you can enable additional security measures for your network.

Most wifi routers have in-built firewalls, but sometimes they can be turned off. Make sure you have one in place and it's not disabled. Firewalls protect against network attacks from threat actors.

🏠 Place your router in the center of your home.

An obvious thing to do. If any hacker doesn't have access to your wifi router signal, they can't attack you by intercepting the signal. Don't place your router near windows or doors and make threat actors' life easier.

While some routers have the auto-update feature - most of them won't, so make sure your router firmware is updated. Because if there's any vulnerability found, threat actors will likely try to exploit it.

🔕 Hide your network from being seen by everyone.

You can use a unique feature to help you hide your network from people in the surrounding area. Changing your network's default name will make it harder for threat actors to hack into your network. Because every router has assigned by the manufacturer its SSID (Service Set identifier) and you can change it and make your network invisible.

Just saying that anything default can be easily looked up on the internet, and that's the first thing that threat actors will try to do. So be creative and make up your complex and strong password that no one outside your network will easily guess. The same goes for username - also, don't make it something obvious. A quick reminder that your strong password should consist of letters of all registers, numbers, and various characters.

What is better — WPA2 or WPA3?
Comparing these two security algorithms, WPA3 has a higher level of security than WPA2. WPA3 provides two operating modes for WPA3-Enterprise and WPA3-Personal. WPA3-Enterprise (Suite B) provides 192-bit encryption, and already WPA3-Personal (WPA3-PSK) is 128-bit.
What is the difference between WEP and WPA standards?
WPA is a protocol that was introduced in 2003, and the Wi-Fi Alliance replaced it with the WEP protocol. WPA is similar in structure to WEP but has improved user authorization and security key processing. WPA also uses the Time Key Integrity Protocol (TKIP), while WEP provides all authorized systems with the same key. Thus, the WAP operating principle allows an attacker to create his encryption key, according to the one used for the secure network.
What is WPA3 Personal?
WPA3-Personal, or WPA3-PSK is a security algorithm that performs password-based security and uses 128-bit data encryption. It refers to the WPA3-Personal mode, the third version of the WPA3 protocol suite. The WPA3 was designed to address deficiencies in the WPA2 protocol. At the same time, it has a higher level of WPA2 week security and provides two modes of operation for WPA3 Personal and WPA3-Enterprise.
How does WPA3 SAE work?
To provide better protection against password retrieval, WPA3 uses simultaneous authentication of equals (SAE). SAE is a auth method that sets the new authentication method - by using the hash of a generated key. As a result, WPA3-Enterprise is not only able to provide additional security for networks that transmit sensitive data but also offers the equivalent of 192-bit cryptographic stability.
How is SAE different from PSK?
The difference between SAE and PSK is that the former is more resistant to autonomous dictionary attacks. This is because the attacker can only learn the password, that is, repeat active attacks, and check whether the guessing of the password is correct or not.