Russia has provoked hackers around the world to focus their attacks on the servers of the largest companies, TV channels, banks, and government agencies. According to the statistics given by ESET, Russia has entered the list of the most attacked countries, which was not relevant earlier.

The most common hacks were attacks of viruses-lockers, which put on the screen the national inscription “Slava Ukraini” as researchers of the region claim. Lockers are the precursors of ransomware, they do not encrypt files, but lock the screen, displaying a banner over the top. Statistics showed that about 11% of all cyberattacks from January-April 2022 were aimed at Ukraine and 40% at Russia. The cybernetics world boomed from that. The cybernetics world boomed from that.

Also connected to the #WarinUkraine, the number of lockscreen ransomware variants also grew in T1 2022. Russia was targeted by 40% of such attacks, while Ukraine only by 11%. The Win/Lockscreen.AWI variant even displayed the title “Slava Ukraini”. 2/5 pic.twitter.com/r1IjvhRVP2

It is believed that many hackers live in the CIS countries, so until this year their activities were not so clearly manifested on the territory of Russia and Ukraine, most likely because of their location or retaliation from Russia. After February 24, 2022, when Russia launched the so-called special operation, that is, the war, the number of extortion programs has grown exponentially. This is also confirmed by Igor Kabina, the senior ESET detection engineer.

The infamous Conti group could not help but distinguish itself against the background of all this. In the beginning, the backgrounds were announced to be valiant to Vladimir Putin, after which the Ukrainian insider created a Twitter account in which he exposed this Ransomware gang. Of course, after the revelation in May, this group magically left the arena. Since then, other companies, such as LockBit, have not expressed their preferences brightly to avoid this. 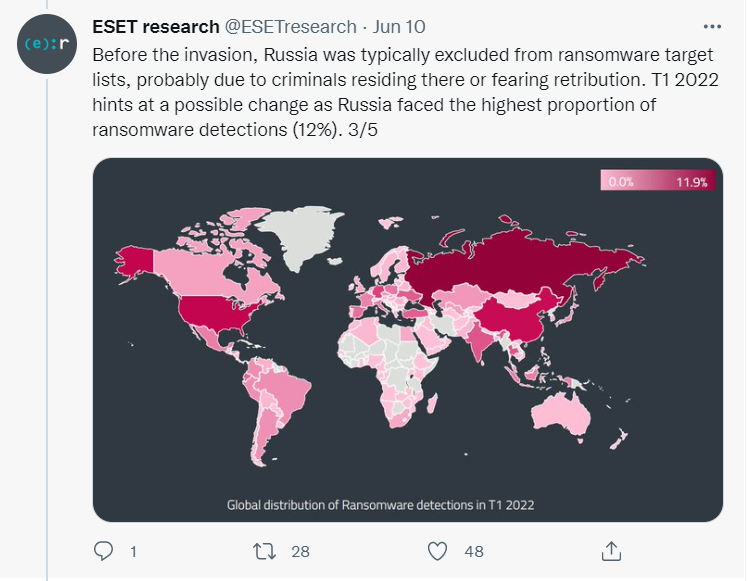 Igor Kabina, the senior ESET detection engineer, claims in her interview that such hacks and attacks will be even more focused on all of this because the military ideology and propaganda are escalating. And as the number of pro-Russian and pro-Ukrainian extortion programs grows, the news will continue to be disappointing for many companies that will fall under the risks of hacking and attacks by these extortionists.