As part of the fight against the spread of coronavirus infection, the Qatar government has obliged citizens and residents to install special software on their mobile devices to contain the COVID-19 pandemic. This spyware tracks contacts with infected people.

This would sound fine, but for some reason the application requires permission for a number of actions that have nothing to do with containing a pandemic.

Using Bluetooth, the Ehteraz application pings nearby devices so that they can be contacted later, if users with whom they were nearby will have COVID-19 symptoms.

“However, application also requires access to geolocation data, which may indicate the intention of the authorities to monitor the movements of citizens”, – for example, reports Al-Jazeera channel.

Moreover, the application asks users for permission to access photo and video materials on the device, make calls, turn off the screen lock, start services in the background, as well as read, delete and modify data in the device’s shared memory. 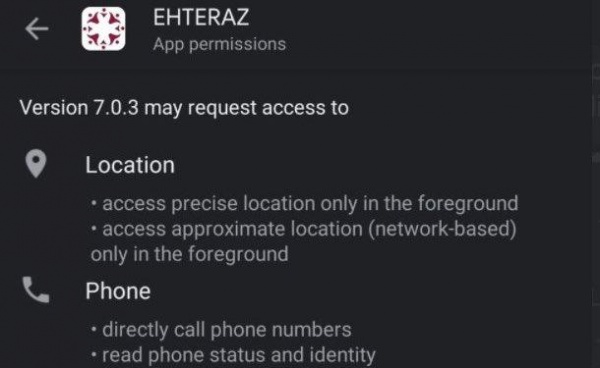 Do you remember the infamous Arab ToTok messenger, with which the UAE government monitored its (and not only) citizens?

Ehteraz was released last month and is obligatory for installation, according to The Times of Israel. Failure to install the application leads a penalty or imprisonment for up to three years (the same penalty is provided for appearing in a public place without a protective mask). On Sunday, May 24, throughout the Qatar were established checkpoints for verification of compliance with the mask regime and presence of applications on citizens’ devices.

According to the Minister of Health of Qatar, Mohamed Al-Thani, all data collected is “strictly confidential. ”We confirm that all user data on Ehteraz app is completely confidential and is only accessible to relevant teams upon necessity,” said Qatar’s Director of the Public Health Department Dr Mohamed bin Hamad Al Thani.

The new version of Ehteraz was released on May 24. According to the developers, in it were fixed only minor bugs.

There is no information if they resolved an issue with access of the application to data and services on the device. MIT Technology Review’s Tate Ryan-Mosley, who has created a database of government-backed COVID-19 apps, told Al Jazeera the idea of contact tracing is old, but that digital tracing, which started to gain traction during the Ebola outbreak, has not proven to be effective yet.

“What we’re seeing now is a type of tech solutionism, meaning that these new technologies are seen as a panacea to all issues. There’s research done that if a government makes something compulsory, like an app, for instance, the likelihood of people putting their trust in it is less. If people don’t trust them, they are going to be looking for workarounds, not using these apps in good faith”, — Ryan-Mosley told Al Jazeera.

Another reason, why privacy experts question such applications is that the technology may be simply ineffective.

Let me remind you that US authorities can hack iPhone, but may have difficulties with Android