On January 8, 2023, Microsoft announced the cancellation of the ESU program for Windows 7. The OS version released back in 2009 now lost all the support from its developer. In January 2020, Microsoft canceled all updates for Windows 7, and the only Service Pack for this version was released in 2013. Let’s see what it means for the users of this OS version.

Windows 7 is not supported anymore

Back in 2009, Windows 7 was released as a work on the mistakes of Windows Vista. They were similar in interface and system requirements, but the newer version was way more optimised. This, together with not the great success of Windows 8/8.1 and the rapid growth of system requirements of Windows 10, made Windows 7 a prolific version even nowadays, in 2023. According to the Statcounter service, it still holds a share of around 10% of Windows users. That’s impressive compared to Windows 8/8.1, which cannot boast of a 5% share even in sum. It is also pretty close to the most modern Windows – 11, which holds ~15% of users. 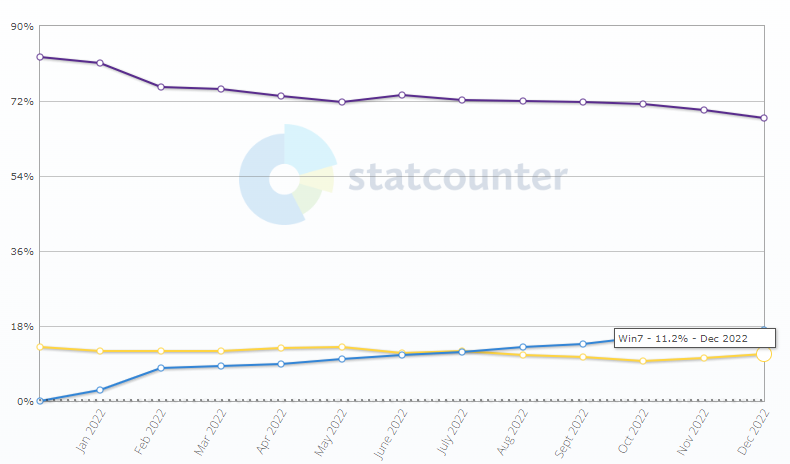 This OS version became an optimal solution for weak systems that cannot get along with more modern versions. It lacks the newest features, like out-of-box compatibility with certain file formats, has no advanced security features, and has pretty poor support of SATA/PCIe SSDs. Nonetheless, it is perfectly compatible with new versions of WinAPI, hence there was no problem finding software. Moreover, all the aforementioned problems are quite easy to solve, as there are a lot of hand-made solutions available.

Cancelling any kind of support for Windows 7 was simply a question of time. The morning sun never lasts a day, and security support was already cancelled at the beginning of 2020. Maintaining old systems’ security aspects requires staff working on discovering possible breaches or working with reports. In some cases, that may be counterproductive – and it is crucial even for the trillion-dollar giant from Redmond.

What does Windows 7 ESU program cancellation mean for users?

Actually, not a lot. As we mentioned above, to the moment of complete support cancellation Windows 7 has already lost all security support. The Extended Security Update program meant receiving some critical updates and vulnerability fixes. With the latest changes, these critical fixes will never appear again as well. Windows users are now latched with the present OS bugs and vulnerabilities on their own. If they want to use it and care about their cybersecurity, they should take care of it by themselves.

From a more global perspective, that means a slow-but-steady write-off of Windows 7. That touches both developers and users. Microsoft’s decisions act as a psychological marker that shows if the system is actual or not. The one done by the company is in fact an indirect offer – update your hardware and system or be at risk. Not the most human practice, but having over 2 billion users from all over the world makes it hard to chief everybody.

For ones who don’t want to change the system for certain reasons, I may offer to try out GridinSoft Anti-Malware. One of the key features of this anti-malware software is its compatibility with a wide range of Windows versions, down to XP. It will launch and work perfectly on Windows 7, despite the fact of its support cancellation. Aside from continuous and regular updates, GridinSoft Anti-Malware can offer a very effective detection system that can detect even the most sophisticated malware. Consider trying it out to keep your Windows 7 system safe.