On June 23, 75-year-old programmer and creator of the first commercial antivirus McAfee John McAfee passed away – he was found dead in his cell in the Barcelona prison “Briens-2”.

The death of the developer was reported by several major media resources, including Reuters, El Mundo, El País, with reference to the Department of Justice of Catalonia. McAfee’s lawyers confirmed his death to Reuters and the New York Times, and one of them said that it was “the result of a brutal system that had no reason to keep this man in prison for so long.”

Now the police are investigating the circumstances of the death of the American businessman, but local publications write that “everything points to suicide.” McAfee was arrested in Spain in October 2020, when he was detained at Barcelona airport at the request of the US Department of Justice with charges of tax evasion, cryptocurrency fraud and money laundering.

John McAfee made millions from promoting cryptocurrencies, consulting work, speaking and selling the rights to his story for a documentary. From 2014 to 2018, McAfee did not file tax returns, despite receiving significant income from these sources”, a statement from law enforcement officers says.

A few hours before the incident became known that the Spanish Supreme Court approved McAfee’s extradition to the United States, where the businessman faced up to 30 years in prison for the above charges.

McAfee considered that the accusations against him are political, and a year and a half before his death, the businessman claimed that the US government was threatening him with reprisals, urging not to believe the news of his suicide. 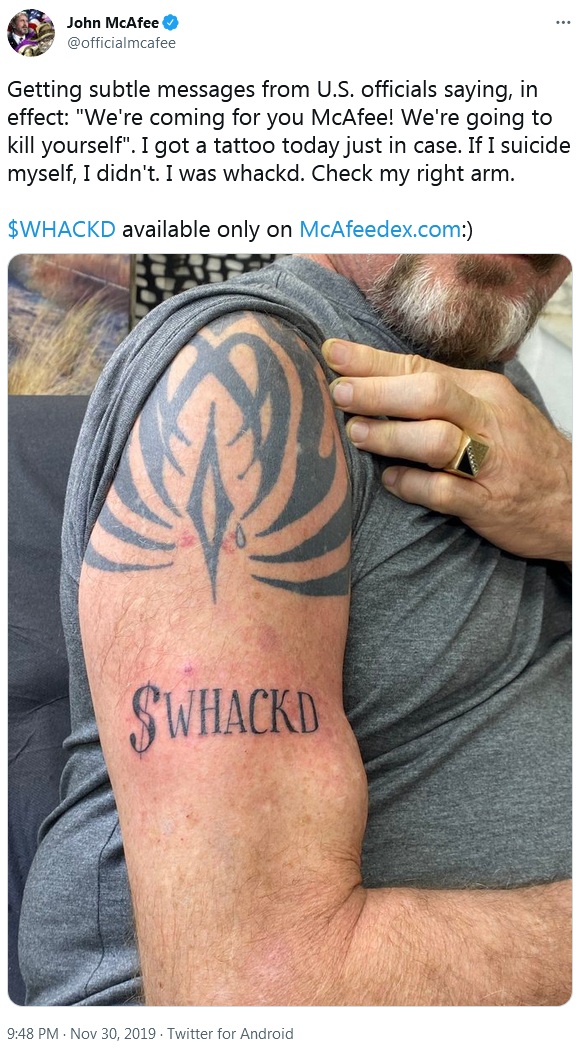 John McAfee is widely known not only for his business success (he went out of business in 1994), but also for his eccentric behaviour and several scandals. In 2016 and 2020, McAfee tried to run for the presidency of the United States from the Libertarian Party, in 2012, the businessman was suspected of killing neighbour Gregory Faull in Belize, and in 2016 he promised to eat his boot live in case of unsuccessful hacking of the iPhone of a terrorist from San Bernardino.

McAfee was bought by Intel in 2010 for $7.7 billion (the deal closed in 2011). But six years later, due to the scandalous reputation of the founder, the processor-producing giant withdrew McAfee from its structure by selling a controlling stake (51%) to TPG.