Half of the 0-day flaws could have been prevented with more comprehensive fixes and regression tests. In addition, four of the 2022 vulnerabilities are variants of the 2021 0-day bugs.Stone wrote in a blog post.

In many cases, the attacks were not sophisticated, and the attacker could have exploited the vulnerability in another way. For example, the recently discovered Follina vulnerability for Windows (CVE-2022-30190) is a variant of CVE-2021-40444 MSHTML.

Many of the zero days of 2022 are due to the fact that the previous vulnerability was not fully fixed. In the case of win32k and Chromium Windows property access interceptor bugs, the flow of execution that was used to test the concept of exploits was fixed, but the root cause problem was not fixed: the attackers were able to go back and activate the original vulnerability. through another path.

And in the case of problems with WebKit and Windows PetitPotam, the original vulnerability was previously fixed, but at some point regressed so that attackers could exploit the same vulnerability again. In iOS, IOMobileFrameBuffer fixed a buffer overflow error by checking if the size is less than a certain number, but not checking the minimum bound of that size.

A researcher on the Google Project Zero blog gave several examples of 0-day vulnerabilities and their associated variants. 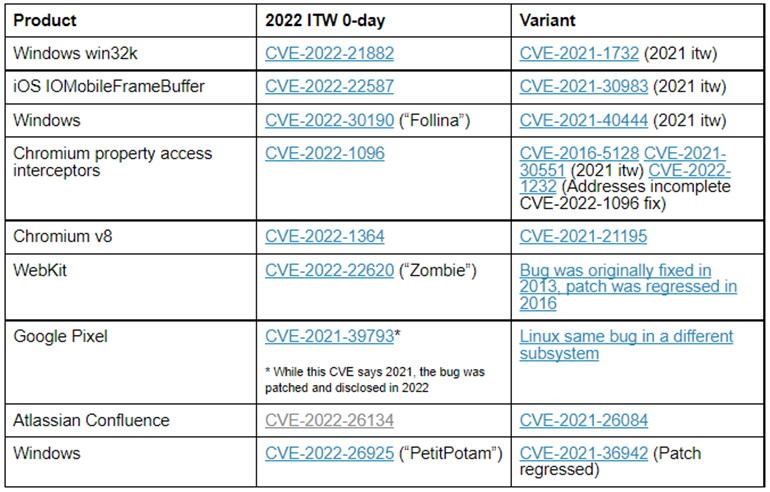 Sharing research helps the industry as a whole. We publish our analyses in this repository. We encourage vendors and others to publish them as well. This will allow developers and security professionals to better understand what attackers are already aware of these bugs. Sharing information will lead to better security overall.Stone concluded.