The media have repeatedly written that scammers sometimes impersonate famous people. For example, last year, cybercriminals arranged fake giveaways of cryptocurrency on behalf of Elon Musk or SpaceX that had hard consequences for naive users.

In particular, criminals are very fond of conducting fake distributions of cryptocurrencies on social networks on behalf of Mask, promising users huge profits, if they first send them some bitcoins.

Although years are passing, and many famous people have got check marks for account verification and even unambiguous postscripts in the spirit of “I don’t distribute cryptocurrency!”, Many users still believe in such fakes, and assume that Elon Musk, the Winklevoss brothers, Bill Gates and other famous personalities can indeed give out bitcoins to everyone.say Bleeping Computer journalists.

This statement is confirmed by their fresh material in Bleeping Computer, in which journalists report that such activity has become more frequent again, and the scammers have already managed to make good money.

The spike in fraudulent activity on Twitter was highlighted by a MalwareHunterTeam researcher. He said that more and more verified accounts are hacked, and then hackers use them to promote another fake distribution of cryptocurrency on behalf of Elon Musk.

Examples of such scams can be seen on the screenshots below. 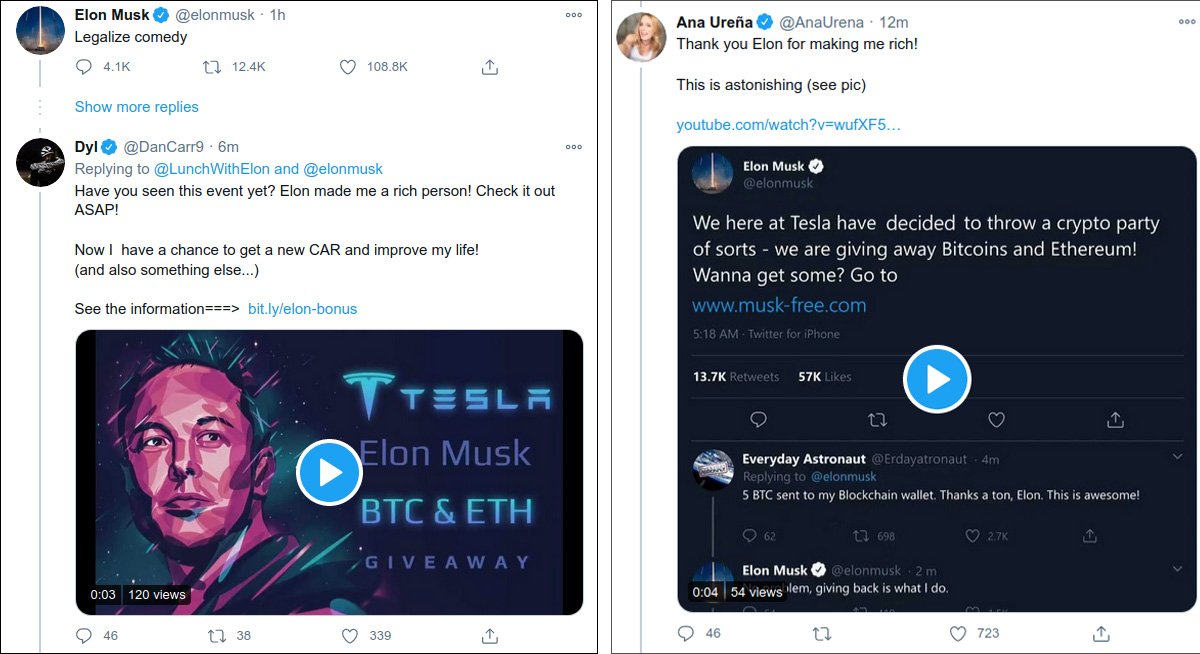 Typically, these tweets contain links that redirect victims to Medium, where the article advertises a fake bitcoin giveaway. The scheme is still simple: users are asked to send a certain amount of cryptocurrency, promising to return the already doubled amount back.

MalwareHunterTeam and BleepingComputer report that most of the accounts compromised during this scam have been inactive for a long time.

Investigators also remind that last year, after a large-scale attack, Twitter abandoned the versioning of accounts, and now such accounts are in even greater demand among cybercriminals, and a real hunt for inactive accounts is under way.

According to BleepingComputer and MetaMask, the scammers receive more than $580,000 in Bitcoin per week. At the same time, the fraud with the distribution of Etherium did not bring such success, and the criminals “earned” only $2,700 on it.

Let me remind you that Elon Musk confirmed that the Russian offered a Tesla employee a million dollars for hacking the company.