Earlier this week, the US Department of Justice announced the arrest of 27-year-old Russian named Kryuchkov Yegor Igorevich, who came to the United States on a tourist visa. According to court documents, he was accused of attempting to bribe an employee of a company based in Nevada: Kryuchkov offered a million dollars to install malware on the Tesla network to hacking and stealing company’s data.

Although the indictment did not disclose the name of this victim company, several news outlets reported at once that the attack targeted precisely at Tesla, which owns a plant located in the city of Sparks, Nevada.

Tesla representatives did not comment on these rumors in any way, but last night the head of the company, Elon Musk, officially confirmed on Twitter that Tesla was the target of the attackers.

“Much appreciated. This was a serious attack”, — wrote Elon Musk on Twitter. 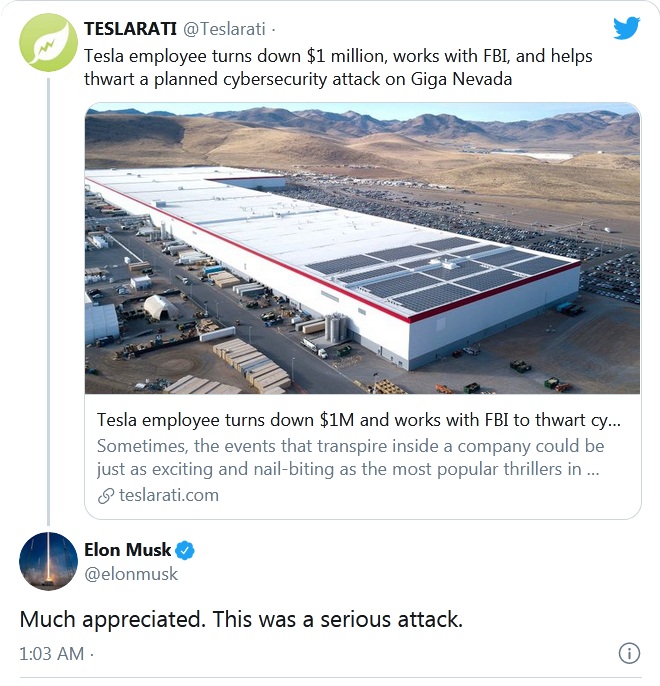 Law enforcement officials say that Kryuchkov is a member of a large criminal group that planned to use malware to gain access to the victim’s company network, steal confidential documents, and finally for demanding a ransom. At the same time, Kryuchkov promised a Tesla employee that other members of his “team” would launch a DDoS attack in order to distract the attention of the security service and hide the fact of data theft.

However, all the plans of the hackers collapsed, as the insider whom they tried to recruit reported about what was happening to the FBI. As a result, the FBI agents kept Kryuchkov under surveillance for almost the entire time of his stay in the United States, and then arrested him, collecting all the evidence necessary for prosecution.

ZDNet journalists compiled a chronology of what happened, fearing information from court papers. In the meantime, there is no need to know about it:

Currently, Yegor Kryuchkov is in custody and the relevant charges have already been brought against him. If the court finds him guilty, he faces up to five years in prison.

Let me also remind you that I wrote about the IS researcher found that the Tesla Model 3 interface is vulnerable to DoS attacks.