The word “botnet” is now ubiquitous, and almost all users know what it means. This is not surprising because this network can be virtually any device with Internet access. Such a network can infect many devices, such as desktop computers, smartphones, and home Wi-Fi routers. All of them may one day have weapons in the hand of cyber criminals.

What is a “botnet” network, why they are dangerous, botnet definition, how to tell if your computer is part of a botnet and how don’t they allow criminals to take control over your devices – we will answer all these questions in this post. 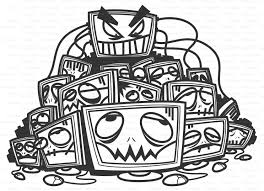 What is a Botnet: How Botnet Works

So botnet definition consists of any device with Internet access that was infected with malware virus and gained control in the wrong hands, without the user’s knowledge. This happens secretly, and the hacked device continues to operate as usual – but at the same time will do everything that cybercriminals command. Most often, criminals are infected by thousands of devices and combine them into a single network – a botnet, or “bot network”.

Creating a botnet is the first stage of the criminal’s evil plan. After a robust infrastructure forms the infected device, it can attack everyone on the network. There are four main areas where the owners of botnets and their puppets can act.

PLEASE NOT: It is essential to study the structure and understand how to check for a botnet on your computer, how a botnet works, and what steps to take to remove botnets.

Probably the most famous way to use such networks – Distributed Denial of Service attacs. DDoS-attack on botnet generates a lot of requests to the target server, which no server can handle, while ordinary users can’t use the server because of its overload.

What are DDoS attacks? Despite their primitive nature, these attacks are still the primary weapon of hackers. Their relevance will only grow with the increasing number of Internet-connected gadgets. DDoS attacks can be used literary any device with an Internet connection, even the most primitive instruments such as surveillance cameras or appliances.

Learn how to prevent DDoS attacks: You can laugh over Wifi-kettles and refrigerators, but the Internet of Things era has already come: IoT-device numbers in the hundreds of millions, and in the future will account for billions. There are many DDoS attacks today, BUT it is very important to be armed and know how to solve the problem.

What is Spam Botnet?

Therefore, all hackers hide behind other computers from botnets, so tracking them is impossible. In addition to spam with unwanted emails, botnets have the inverse task – to steal from the infected computer’s email address the owner and all email addresses from the contact list. Then these stolen addresses will be added to the spam database for mailings. If your spam filter doesn’t work well, you can imagine how many junk emails can be sent to the most common email address. But not all know that most spam is also a botnet network dirty trick because agencies strictly persecute spammers by blocking their email accounts and IP addresses.

If spammers steal your mail, it is unpleasant but not fatal. But, of course, email – is not the only aim of intruders. Passwords and personal information – all this is valuable. Using your computer or smartphone to log in to online banking or just shopping online? We have bad news for you. In some cases, malicious software as part of a botnet can steal the password and replace or modify a web page requesting the data that generally are not introduced, such as the PIN code for your phone or CVV2 code.

Storage and distribution: In addition, botnets are used to search for vulnerabilities of not yet infected devices, install new copies of themselves, and even become the storage of other viruses, trojans, and downloaders of different botnets networks. As you can see, the victim could be faced with a range of various troubles.

Useful Tips: How to Prevent Botnets