The resource was fake, and the site administrators did not know any killers, but this did not stop them from taking from 5,000 to 20,000 dollars in bitcoins to search for performers.

The site was created in the 2010s and allegedly offered visitors a platform to search for contractors for assassinations. Users were asked to provide details of the target and information on how and when the assassination was to take place and then were asked to pay a “commission” in bitcoin. 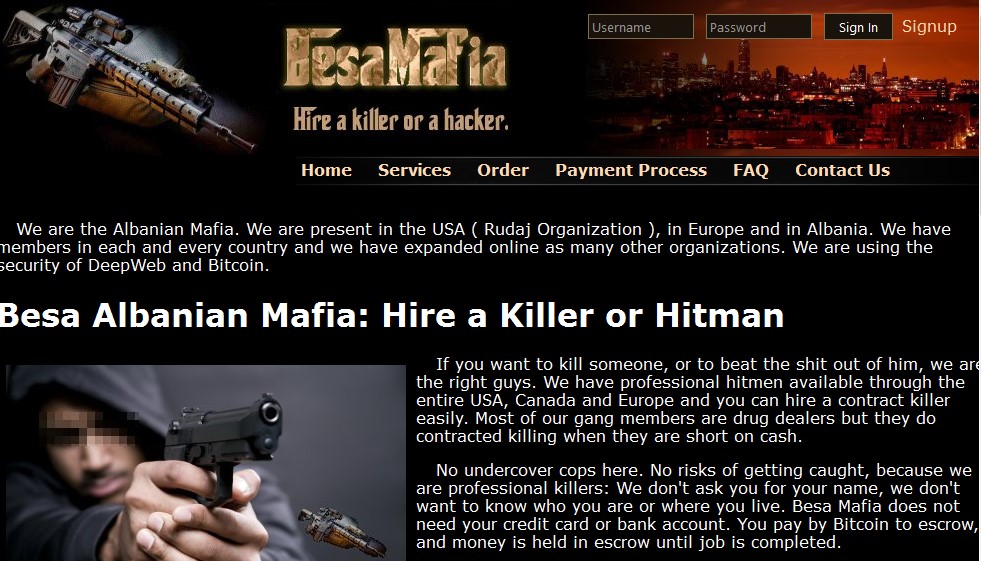 From the very beginning, it was clear that the site was most likely a fraudulent one, and yet, over the years of its operation, the administration has accepted thousands of orders and found many paying customers. Husbands ordered the murders of their wives, business partners sought killers for their colleagues, a man who lost money on a sports betting site asked about the murder of a customer service representative who refused to help with a refund, and there was even one who ordered the murder of a 14-year-old teenager.

Many details about Besa Mafia became known back in 2016, when the site was hacked, and information about the users of the site and their orders became public. Let me remind you that at that time, the resource claimed to be connected with the Albanian mafia.

The Romanian Organized Crime and Terrorism Investigation Authority (DIICOT) now reports that the raids and arrests were carried out at the request of US authorities. The US Department of Homeland Security and the FBI have been investigating cases related to this resource for many years. As DIICOT writes:

The US authorities have determined that this group consists of five or more persons located on the territory of Romania and coordinately operates these sites and launders money received due to incitement to murder.

As a result, during the operation by law enforcement officers, five people and four witnesses were detained.

Information security expert Christopher Monteiro, who studied Besa Mafia activity in detail back in 2016 and devoted a series of articles to it on his blog, angered the site administrators so much that they threatened him personally.

Then Monteiro wrote that Besa Mafia is a scam and, to some extent, an urban legend. However, the users of the site took their “orders” seriously, they wanted to cause real harm to other people, and the expert tried for a long time to warn the authorities about this danger.

Unfortunately, law enforcement officers took Besa Mafia seriously only in the 2020s. As a result, according to Monteiro, about 25 customers have since been arrested, but the administration of the site has remained elusive until recently.

For many years, the authorities did not know who was behind the Besa Mafia since someone “Yura” was responsible for all contacts with users. He talked to people who asked questions about the services of killers, encouraged them to make orders, and tried to dispel all their fears in broken English. Based on the logs of such chats, the authorities assumed that he lived in Eastern Europe (most likely in Romania). At the same time, Yura even gave interviews to journalists, changing his voice, but his identity and whereabouts were not known for certain.

Even now, after all the arrests and searches, it is not clear whether Besa Mafia was the brainchild of one person who developed his “business” to such an extent that he needed the support of an entire team or some group was always behind the site.

DIICOT reports that the damage from the work of the Besa Mafia is estimated at about 500,000 euros, but if the scammers kept the bitcoins received in 2016, they would probably be worth much more today.

The aforementioned Christopher Monteiro, who for years tried to draw attention to the Besa Mafia problem, reacted ambiguously to the news about the detention of Yura.

It’s good that an international law enforcement operation led to the arrest of these criminals, but will they ever begin an active investigation into the thousands of names on the “death list”?the researcher comments on the pages of the Vice Motherboard.

The media also note that Besa Mafia already has many imitators. For example, a journalist from Vice Motherboard writes that he easily found a similar site on the darknet aimed at a Russian-speaking audience. From there, he was directed to Telegram, where he asked how he could find a killer in Los Angeles. The resource owners answered him within a few minutes, saying they could arrange everything quickly and the murder would cost $15,000.

Let me remind you that we also talked about the fact that the British police announced the arrest of several members of the Lapsus$ group, and also that the US authorities arrested Kaseya hacker and attacker associated with REvil and GandCrab.